A Hundred and One Hollywood Tales 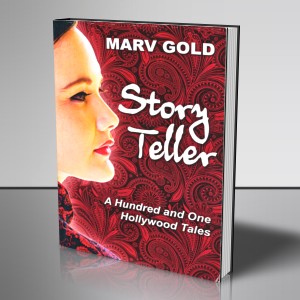 Once upon a time in Hollywood there was a gifted mystery woman, a real woman who introduced movie stories.

The Story Teller she was called. A highly talented woman, she recited enchanting tales. Adventures and mysteries, comedies and romances. She characterized leading stars such as Garbo, Gable, Harlow, Tracy, Hepburn, Taylor, Garland, and more. Many of her stories became classics -- Ben Hur, the Big Parade, Mutiny on the Bounty, Grand Hotel, Dinner at Eight, The Good Earth, A Star is Born, Gone With the Wind, Quo Vadis, The Human Comedy. A thousand films in all. Yet she was virtually unknown. Producers called her Sheherazade; few knew her real name. Studio records only identified her as Story Teller to keep competitors from hiring her away. And so, from Silents to Talkies to the Golden Age of Hollywood, she was kept in the shadows. Now in one novel inspired by her life story, screenwriter Marv Gold portrays a sensitive young woman by day, and a seductive beauty in her dreamworld. As she becomes swept up in studio affairs and fiascoes, she faces a swirl of passions, scandals, and heartaches, until at last she is unveiled.